Enter your City name or Pincode

Alanthurai, also written as Alandurai, is a sub-urban area of the Coimbatore district in the southern state of Tamil Nadu. 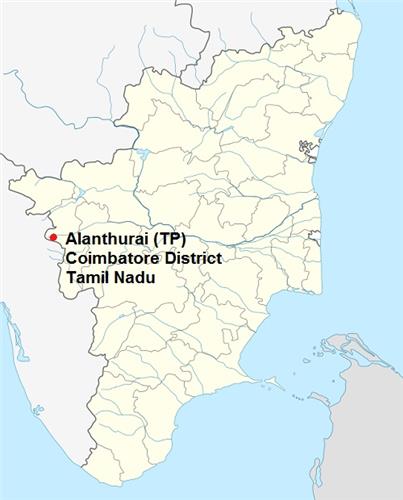 Alanthurai is a booming small town that lies on the foothills of the Western Ghats mountain ranges, surrounded by high hills and perennial water bodies. What is more, Alanthurai town is fairly close to the borders of the neighboring state of Kerala. Precisely, Alanthurai is situated in between Anaikatti settlement and Thadagam in Coimbatore. The geographic coordinates of Alanthurai are 10°55'43N 76°46'34E.

The governing body offers good infrastructure facilities and civic services to the town which include water supply system, sanitation, laying and maintenance of roads, lightings and other important conveniences like burial/cremation ground, public transport facilities and so on. Apart from the above responsibilities, the Alanthurai town panchayat is responsible for implementing state and central government schemes and programs in the town. The designated town panchayat code of the Alanthurai Town Panchayat is 11.

With regard to government, Alanthurai is divided into fifteen administrative wards for which local body elections are conducted every five years. Each administrative ward of the town panchayat is represented by an elected ward councillor.

Contact Information of the Executive Officer of the Alanthurai Town Panchayat
Mobile Number: +91-8883100322

Comments / Discussion Board - About Alanthurai